skip to main | skip to sidebar

The story behind "Azana sinusa: remarks on range and records."

I previously promised to blog every one of my future publications. And finally, I am able to follow through on the first one. I'll be using Eisen's brilliant blog post about the "Stalking the 4th Domain" paper as a format guideline, but since this is very much a small scale natural history story rather than a large scale molecular biology story, I'm mostly making this up as I go. As a natural history story, it may not seem like science to all people. Taxonomist FPD Cotterill calls natural history an ideographic science, a science of details that provides the primary support for the wide scale theorems of law-like or nomothetic science. And as such, denigration of natural history does not fair well for biology in general. So I will pass by the naysayers and move forward.

In late 2010 I was attempting to organize the wet-stored specimens of Sciaroidea (fungus gnats) in the Clemson University Arthropod Collection. The CUAC does not have a very large collection of the group, only 100 to 200 specimens, most of them collected before 1990 by former students or in flight intercept traps. Fungus gnats are of great interest to me, since they are greatly understudied in North America, with perhaps less than 50% of all species described. In particular, I'm interested in the Family Keroplatidae, the predacious or web-spinning fungus gnats, the larvae of which spin a web of sticky silk to capture small arthropods or fungal spores. You may have heard of the cave glowworms of New Zealand, a popular ecotourist destination; these bioluminecent fungus gnat larvae are keroplatids.

I was using the genus key in the Manual of Nearctic Diptera (MND) (now available for free online) to identify the adults. Despite being thirty years old and somewhat out of date, the MND worked well enough for my purposes. When I identified specimens from two different vials as the genus Azana, Family Mycetophilidae, I was intrigued. The specimens were less than 10 cm in length, with a distinctive reduction or loss of the medial and cubital wing veins (see figure at end).

At the time of the Nearctic Manual's publication, no North American species of Azana had been described, although Vockeroth believed there was at least one species on the continent. Both Jean Laffoon and Elizabeth Fisher had previously noted collections of the genus which remain unconfirmed, from Minnesota and Cape Breton Island (Nova Scotia), respectively. It wasn't until 1995 that Edward Coher finally described this species from Maine, New Hampshire and Massachusetts as Azana sinusa, which tells you just how rarely collected this organism is. From an additional male specimen in the pinned collection, I was able to confirm from the genetalia that these were probably all A. sinusa Coher. Although Peter Kerr of California Department of Food and Agriculture recently described two new western species, A. malinamoena and A. frizzelli, A. sinusa remains the only Eastern species.

All these facts were not so intriguing as was the /location/ of the collections: the coastal plain and sandhills of South Carolina. The type specimens from Coher's paper were collected in the mountains and coastal areas of New England, approximately 1200 km to the North, with no specimens ever collected below 40 degrees latitude. Since this continues to be a poorly known, seldom collected species, and since the specimens I had found in the CUAC were so far outside the known range, I decided to publish this information.

I wanted to put a note here about the journal I chose for publication, since most readers are probably not familiar with it. Check List is a peer reviewed, open access online journal specializing in regional species lists and notes on range and distribution. Traditionally, a short note such as this would have been published in Entomological News, but that particular journal has had a large backlog over the last year; as I already had one article waiting for publication in that journal, I thought it wise to try Check List. Though the website and editors are Brazilian, the journal is published in American English, and the editors were timely about corresponding with me. The best thing about this journal is that it's completely open access and free for authors. Since they do not publish anything that might be considered a nomenclatural act or new species descriptions, a print version is not necessary. It also means that there is no limit on publication size, and that what limits the publication speed is the peer review process, correspondence time, and copy editing. I will say that the journal guidelines are very picky about formatting, and I was asked to remake the distribution map I originally provided; this is perhaps for the best. I will definitely be coming back to this journal with future manuscripts. They fill a publication niche that used to be a large portion of the entomological literature, but fallen into disrespect because publishing short notes is nowadays seen as cheating, as padding one's CV.

Some readers may be wondering why I would take the time and effort to publish such a short note on the range of a rare and seemingly insignificant species. And I admit, the reviewers taxed me with this same question: is this really /worthy/ of publication? Well, certainly the editor would have rejected it outright if he didn't see something worthy in it. And of course, it would have never been published if the reviewers hadn't eventually felt it worthy. The photo I published with it is the first photo (to my knowledge) ever taken of this species, and the distributional data and map the most complete. It continues that we know essentially nothing of the biology of this species. Little information was contained on the specimen labels, and it's so rarely collected that trends are hard to draw. Coher, in his 1995 publication, said that the morphology of the mouthparts suggests the adults are nectar feeders, but we have no observations of this. Kerr collected his Azana species from flight intercept traps suspended from redwood in California. Might Azana sinusa as well dwell in the tree tops? There's no way of knowing from the scant information we have, though this behavior would suggest why it is rarely collected; combining the data from all publications, less than 50 specimens have ever been reported.

Overall, working on this manuscript has given me more puzzles than answers. But, I think it was overall good; it synthesizes the known information, and shows us a wider picture of the species than we realized. I never undertook the project as an attempt to pad my CV or make a name for myself. Goodness knows there are easier ways to accomplish this. The synthesizing and editing was far more work than I had anticipated, and the process far longer than I had hoped, but I think it turned out alright. Despite my past criticisms of Encyclopedia of Life, I plan to create a full entry using the information in this and previous publications.

The species Azana sinusa, and little forgotten or seldom noticed species everywhere, remind me of my favorite vignette from Aldo Leopold's A Sand County Almanac:

Within a few weeks now Draba, the smallest flower that blows, will sprinkle every sandy place with small blooms.

Draba asks, and gets, but scant allowance of warmth and comfort; it subsists on the leavings of unwanted time and space. Botany books give it two or three lines, but never a plate or portrait. Sand too poor and sun too weak for bigger, better blooms are good enough for Draba. After all it is no spring flower, but only a postscript to a hope.

Draba plucks no heartstrings. Its perfume, if there is any, is lost in the gusty winds. Its color is plain white. Its leaves wear a sensible woolly coat. Nothing eats it; it is too small. No poets sing of it. Some botanist once gave it a Latin name, and then forgot it. Altogether it is of no importance--just a small creature that does a small job quickly and well.

Leopold was king of qualitative natural history, he wrote in a way that even the smallest and seemingly insignificant of organisms glowed with individuality and purpose. While I don't claim to equal him by any means, I hope to shed some light on the matter of species like Azana sinusa, which now at least has a face to put on the name. 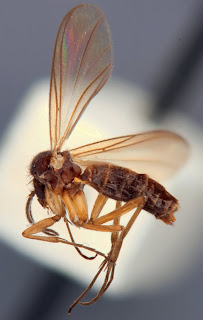 I don't see how anyone could question whether a 1200 mile range extension is publishable. I'm a big fan of "notes" papers, and in my taxa of interest (wood boring beetles) there is a long history of such. Some of this might be a result of the large avocational interest in the groups (as with me), but there have been plenty of professionals joining in. Guess I never saw it as padding the resume.

Pan-Pacific Entomologist still publishes a lot of notes papers (as well as taxonomic papers). It is a traditional print journal, if you ever find yourself looking for something in that vein.

Well, 750 miles, anyway. The literature used to be full of papers like this, a rich bounty of notes to draw from when doing research. I could have just published the research on my blog, but then it wouldn't be archived with Zoological Record.

Overall, I have a strong feeling that there are many such notes as this every year and not published because they are "unworthy of publication". And thus even the basic attributes of species continues to be unknown.

I hadn't considered Pan-Pacific Ent, so thanks for that suggestion! Do they only take papers from the west coast or will they publish manuscripts from all of the Nearctic?